Tonight Brayden found out he was ‘so smart’ when he put his Lego plane set together – all by himself. 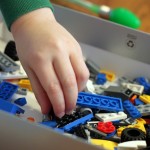 Well, it wasn’t exactly all by himself. Uncle Matt was nearby directing and encouraging.

Brayden is a very visual spatial kid and has always been drawn to building and making things. As a preschooler, he couldn’t manipulate the small blocks and tiny parts, so he played with Legos that were assembled. In the meantime, he used big blocks and lots of other activities to develop his fine motor skills and whenever he got a new Lego set, he asked for help assembling,

But tonight was different. We sensed a new readiness. A readiness to build on his own. But rather than dumping all the pieces out for him and letting him at it, Uncle Matt set the stage for a successful first building venture.

Uncle Matt opened the bags and showed Brayden how to lay out the pieces, organizing them by size and color (this is great for developing visual and spatial organization skills), Then they followed the directions included in the Lego box. They were step-by-step picture directions!

When the building started Brayden protested, saying, “I can’t do it.” We realized the number of pieces in front of him overwhelmed him, but Uncle Matt stayed steady and calm, encouraging him, one step at a time. As they worked through the initial steps, Brayden gained confidence and his “I can’t” turned into “I’m so smart!”  “I’m doing it! I’m doing it!!”

Never underestimate the power of a well-organized set of Legos.

Turn Off Tech and Deal Me In